Twitter have introduced embeddable posts so that blogs and news organisations can include status updates, videos and photos in stories.

The first part of my example isn’t really story telling as such; for this purpose I thought I would try out it’s potential with two posts and see how it works.

The first one includes a link towards the Banburyshire Info Facebook page, that is itself a shared link from the original source Barry Whitehouse: Art Tutor & Artist Facebook page. I have since found out Facebook have also introduced this feature too. I have added a couple near the bottom of the page to aid the story I have created further down.

This second one includes a image with no other links from Books and Ink Bookshop based in my home town of Banbury. You really should check the shop out if you have a love of books.

What i find really cool is that twitter members can also comment, favorite and re-tweet the post directly from the embed.  What do you think, will embedded story posts work?

Once you have decided what story to tell from your twitter feed,  this image shows you the first stage of what to do. 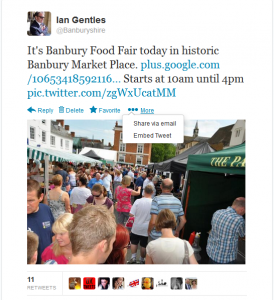 This is the actual tweet and the start of a story of what turned out to become a HUGELY successful Banbury Food Fayre. You can really take your story telling to a higher level if you so desired. For this purpose I’m only giving you the briefest insight of what happened.

You may have noticed I do like to cross pollinate links on social sites for digital marketing purposes. The one in the tweet goes to the Banburyshire Info Google+ Page where I originally shared the link.

Once you have clicked the link the page will open with some code at the top. Like this one has. 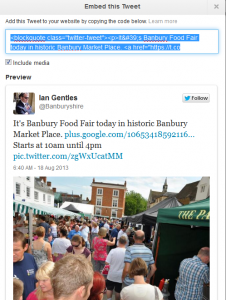 Copy and place the code into the text body of your website and publish. It’s that simple.

Thanks to @TownEvents for such a great #BanburyFoodFair they even managed to order some sunshine! We talked #recycling & food waste all day!

Town centre was packed today for #banburyfoodfair – so much choice! Well done @TownEvents and all the stall holders. @banburynews

Now back home after a brilliant day at the Banbury Food Fair. So busy that we had to restock from the cidery TWICE! Hope you all enjoy it.

As you can see it’s an interesting way to tell a story; in this case of what a wonderful success the 2013 Banbury Food Fayre turned out to be.

The sharing of images is HUGELY popular on the social networks.

It only looks like a wedding cake. It’s actually knitted! #BanburyFoodFair pic.twitter.com/QxMVxTpxoZ

And you can add to the story from Facebook too. I’ll blog about the how in the next couple of days after I have researched a decent story.

Lexie Munday with all her rosettes.

There you have it. Story telling from the sources telling the story. Or another way to put it; story telling has just become a whole lot more authentic.

To add; Twitter has also now launched a new feature that will show related headlines links towards the story behind the tweet. Pretty darn useful addition in my humble opinion that shows how powerful embedding a tweet can become.

Thanks for popping by.

Give me, Ian Gentles, a call today to discuss how your business can win in the world of digital marketing. You don’t have to be based in Banbury or even Oxfordshire. Technology and digital marketing go hand-in-hand, so you can access my services from every corner of the globe.

We offer on-location training in the Banbury area and remote training for the rest of the world.